Major League Soccer has been the United States’ and Canada’s top tier of football since debuting in 1996. From the start, MLS has attempted to Americanise the sport while trying to stay true to some of the traditional ways the game is played in Europe and South America. 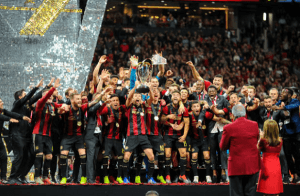 Over the last 20-plus years, there have been some strange rules that the league has adopted. Some have lasted while others were ended.

A draw is not a common result in American sports and MLS believed that the league shouldn’t have games finishing even. The thinking was American fans wouldn’t be interested in watching a game that ended in a tie. The league adopted penalty shootouts for matches that ended in draws. Rather than a traditional penalty shootout, however, players could dribble from 35 yards out and take a shot at goal one on one with the goalkeeper.

When the league first started it reversed the clock to count down from 90 rather than up from zero. Once again the league attempted to Americanise the sport thinking it would make soccer fans. Little did MLS’s genius executives know, the people who were watching at the time were already fans.

3. The league owns each player’s contract

Unlike teams elsewhere in the world, MLS owns each player’s contract rather than the teams. The idea was to have the league own things centrally to keep clubs stable in the beginning. If a player is transferred out of MLS for a fee, then the league will bank between 33% and 66% of the money while the club gets the remainder.

One of the most maddening things about MLS is the schedule. In 2019, the league had 24 teams and each played a 34-game schedule. Rather than playing a 46 match schedule and face each team home and away, MLS clubs play a lopsided fixture list in which they may play Team A more times than Team B.

1. Too many playoff teams

MLS crowns its champion with a playoff system and allows over half the league’s teams to enter the postseason. The format means that teams can be poor all season, barely make the playoffs and still win the MLS Cup.